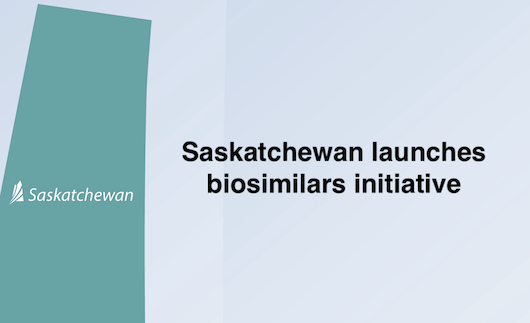 Saskatchewan has become the sixth Canadian province and territory to implement biosimilars transition (“switch”) policy, which moves patients from certain originator biologics to the biosimilar versions. Under Saskatchewan’s biosimilar transition policy, patients and their prescribers have six months to discuss transitioning from an originator to a biosimilar. The policy change involves medicines used for inflammatory arthritis, inflammatory bowel disease and psoriasis, as well as certain insulins used to treat diabetes.

Prior to transitioning, both prescribers and their patients should be fully informed and have all available information about the biosimilar medicine, such as details about the reimbursement policy, patient support program information, including contact names and phone numbers.

“Today’s drug policy announcement will help ensure continued reimbursement coverage for patients with inflammatory arthritis who transition to a biosimilar biologic. These medicines are lifesaving for those who need them, and their affordability now and into the future is critical. In a province that is the birthplace of Medicare that is significant. Based on the experience of Canadian patients who have already safely transitioned, we know the policy works and offers the Saskatchewan government an opportunity to reinvest savings into their healthcare system, especially at this time when resources to maintain and improve patient care are urgently needed,” said Cheryl Koehn, Founder and President, Arthritis Consumer Experts.

Biosimilars are new versions of medicines that are made when patents and data protection expire for originator biologic drugs. A biosimilar has the same active ingredients as the original drug but is less expensive. Biosimilars have been approved for use in Canada since 2009 and for use in inflammatory arthritis since 2014. Fifty biosimilars are currently approved by Health Canada. Biosimilars can improve patient access to high quality medicines at a lower cost and save public and private healthcare systems billions of dollars now and over the coming years.

In today’s announcement, Saskatchewan’s Health Minister Paul Merriman said: “This initiative will ensure access to high-quality, essential medications for Saskatchewan residents remains sustainable into the future. The savings will be reinvested into the Saskatchewan Drug Plan to support patient access to public drug coverage and new drug benefits.”

The Saskatchewan Ministry of Health estimates that the province will see annual savings of approximately $20 million once patients complete the transition to biosimilars by May 1, 2023.