This week’s episode of Arthritis At Home features Graeme Reed, Chair of the Canadian Spondylitis Association’s Board of Directors, on structural racism and health inequities faced by Indigenous Peoples in Canada – including those living with arthritis. 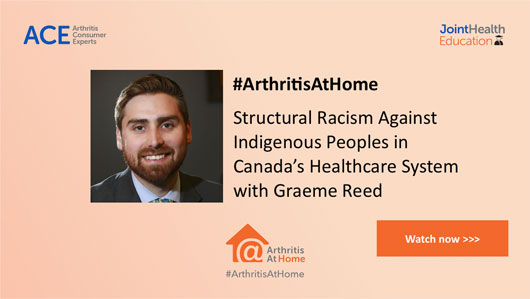 Graeme recently collaborated with Arthritis Consumer Experts (ACE) to produce the fall 2020 issue of JointHealth™ insight, focusing on the the impacts of structural racism on the health outcomes of Indigenous Peoples. In this episode of Arthritis At Home, we continue the conversation on this topic and highlight powerful findings from a recent investigation into Indigenous-specific racism in B.C. healthcare. Graeme also explains how non-Indigenous patients and providers in the arthritis community play an important role in helping to address these issues.

Graeme is a patient advocate living (well) with ankylosing spondylitis (AS) and Crohn’s Disease. He has recently transitioned into the role of Chair for the Canadian Spondylitis Association, following several years of involvement on the Board, and has finished a term as Research Ambassador for the Canadian Institute for Health Research’s Institute of Musculoskeletal and Arthritis. Professionally, he is a Senior Policy Advisor at the Assembly of First Nations, leading their involvement in federal and international climate policy. In his spare time, he is a doctoral candidate at the University of Guelph, studying the intersection of Indigenous governance, environmental governance and the climate crisis. He is of mixed Anishinaabe and European descent.