Arthritis At Home Episode 50 – Life and parenting with ankylosing spondylitis

This week’s #ArthritisAtHome features Chris Pudlak, person living with ankylosing spondylitis and a member of the Arthritis Patient Advisory Board of Arthritis Research Canada 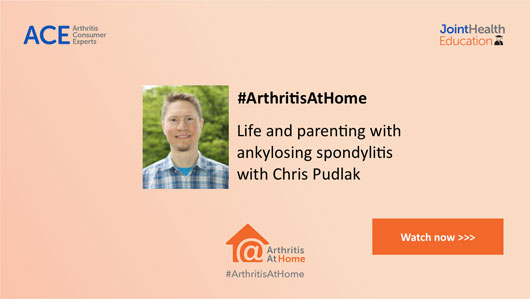 On this episode of Arthritis At Home, Kelly Lendvoy has a conversation with Chris Pudlak, a young father of three and a person living with ankylosing spondylitis (AS). Chris shares his diagnosis journey and how he and his family have been managing work, health, school, and special celebrations such as Halloween during the pandemic.

Chris Pudlak has been a member of the Arthritis Patient Advisory Board of Arthritis Research Canada since September 2019. He was diagnosed with ankylosing spondylitis in 2016. Initially, he thought his back symptoms were due to poor posture. Chris spent the first two years after diagnosis chronicling his AS, including various treatments and medications, and how to regain normal activities. He hopes his experience with AS, combined with the analytical perspective of a mechanical engineer, will help researchers with their work and ultimately help other AS patients manage their symptoms.